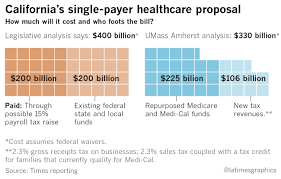 Single-Payer Health Care System called the “Healthy California Plan”. The Healthy California Plan or S.B. 562 was proposed by state Senators Ricardo Lara (D-Bell Gardens) and Toni Atkins (D-San Diego). The single payer system would effectively eliminate the need for insurance companies in California and would supposedly remove premiums, deductibles, and the out-of-pocket maximum structure we see in our health insurance plans today. California would have a healthcare system in place much like that of Canada and the UK. The plan has been supported by the California Nurses Association which has long pressed for a single payer system. However, Governor Jerry Brown and many California business leaders and politicians are critical towards the Single-Payer system as it is very unclear how it would be financed.It would most likely drive business out of California into neighboring states such as Arizona, Nevada  and Oregon which would have a considerably lower tax structure. It is even suggested that Senator Lara ,”who plans to run for state insurance commissioner in 2018″ might use the publicity of the bill “in an effort to raise his political profile ahead of the upcoming election.”

The University of Massachusetts at Amherst’s research and the State’s Legislative analysis suggests the single payer system would cost between $330-400 billion a year.  This is in sharp contrast to California’s total budget, which is in a good year about $ 120 billion. The proposal suggests the Healthy California Plan would be paid for by a mix of individual, local and state taxes pooled with Federal income taxes that would normally go to Medicare and Medicaid programs. A further 2.3% gross receipts tax on businesses and a 2.3% sales tax coupled with tax credit for families that qualify for Medi-Cal would also be added. Repurposed Medicare and Medi-Cal funds would cover roughly $200-225 billion while a new proposed payroll tax of 15% would cover the remaining $200 billion. This substantial price tag will most likely doom its political prospect.

Hearing that the Senate approved the bill confuses many Californian in thinking that the single-payer is right around the corner. However there are many more hurdles to take.  As next step  the bill has to be approved by the legislature.  Governor Jerry Brown has been cold to the idea and may not even sign it if it passes the state House. If it passes the state legislature, the next step would be to have the voters’ approval, as to “exempt it from spending limits and budget formulas in the state Constitution”.  Furthermore, the re-purposing of Federal  funds for Medicare and Medi-Cal would have to be approved by the Federal Government through a waiver. Under the current presidency,  this most likely is not going to happen.

We should also review our current health insurance system to determine  if we really want to make a big leap into untested waters  with a gigantic price tag. Covered California is a robust public state exchange and has been effective at helping lower middle income families from getting subsidies to help pay for their health insurance plans. Those near the federal poverty line go automatically into the state’s Medi-Cal program which offers the poor, underprivileged and unemployed a solid level of insurance with  a limited provider network and many of us agree that Medicare is working just fine as is . So why not spending the energy in improving the current system, instead of demolishing the complete health care system in California, not calculating the risk to weaken the economy of California. ” Brown argued that proponents of single-payer were trying to solve a problem by creating an even bigger one. “It’s not a pathway that can be followed.”

The single payer system may in fact work but a major concern is how it would be enforced. A Healthy California Board would be created to manage the system and the members selected by the governor and state legislatures.  The “Healthy California Board” would set rates on how procedures would be reimbursed and negotiated with providers. There would most likely be “fee-for service” model be implemented which, to make a living for providers, would result in more doctor and hospital visits and procedures.  The “Healthy California Board” would also have to the make decision if experimental procedures would be approved.  The choices for consumers would be less and the waiting times at the doctors would substantially increase.  Most likely the doctors and nurses would have less administrative hassle, however their paychecks would be lower.  How would going out of state for medical services be covered?  There are plenty of things that are left unexplained. Lastly, another concern is the loss of jobs from the insurance industry as a whole from your healthcare advocates, insurance agents, insurance carriers and many other jobs around health insurance. How would that impact the state’s economy with increased taxes and less money to spend. A single payer system in only one state will most likely not be practical. Bernie Sanders was planning to introduce a federal single-payer system , which would have a better chance to work than a single state single-payer system. Many manufacturing business would most likely migrate out of California in the neighboring states of Nevada. Arizona, Oregon and Portland. Highly qualified doctors and nurses will not want to take a pay cut while having even more patient to treat. There is a plethora of issues which are not fully addressed by this bill and we will have to wait and see if such a dramatic shift in our healthcare system will be implemented and how.

Solid Health Insurance Services  will follow the process of S.B. 562, the single-payer system  in California as well as Trump Care and keep you posted of future decisions. Our mission is to find you affordable health insurance which fits your individual, family and or business needs no matter what political turmoil we will experience in California and the USA.