The Future of the Affordable Care Act

There is a widespread dissatisfaction among House and Senate lawmakers – conservatives and moderates alike – with the recently published Republican health plan “American Health Care Act’ ( ACHA). The recently released analysis of the Congressional Budget Office has predicted that 14 million fewer 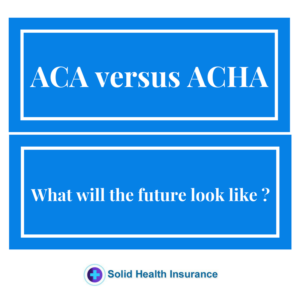 Americans would be insured in 2018.  The likelihood that the Affordable Care Act (ACA- Obamacare) will be repealed is actually low, because a true repeal requires that both the House and Senate will have to approve it. While the Republican House might vote for the ACHA plan, the likelihood that the Senate will have the necessary 60 votes for the new ACHA plan, under this current political situation, appears almost impossible. The Republican lawmakers would have to convince 8 Democratic lawmakers to vote for the Republican Health Care Act. What this means is that instead of a complete repeal, a modification or reconciliation of the Affordable Care Act is much more likely; however, it will need to be a bipartisan compromise.

Many Americans agree that the current ACA health plan has to be modified. Issues such as fewer doctor choices, higher premiums and higher out-of-pocket maximums have occurred under the existing ACA health plans. Certain states such as Tennessee, Minnesota and Texas have been hit much harder than states like California, where there is more competition among the insurance carriers and more available choices for Californians.

Many agree that the soaring Medicaid population is unsustainable for the Federal Government. Since the implementation of the ACA and the expansion of Medicaid to those with a 138 % Federal Poverty Level, the number of Medicaid Holders soared in California 57 percent. Now every third person in California is on Medicaid. This includes half the babies born, plus half the aging population which is on Medicaid for long term care needs.

There is general agreement that any affordable care plan must have  3 essential elements.( 3 legs)

What would a reconciled or modified Affordable health care plan look like?

What does all this mean for 2018 in the health insurance industry?

Unfortunately, in all this health care reform review, no one has even made an attempt to reduce health care costs. In this era of information technology, it should be possible for Americans to review online pricing for standard health care procedures in their region and to review the costs of prescription drugs and possible generic alternatives. The more transparent the health care market is to the consumer, the greater the likelihood that consumers will use health care wisely, which would have the consequence of helping to keep health insurance premiums in control.

Solid Health Insurance Services’ suggestion for 2017 is, that those Californians who currently have a  Silver, Gold or Platinum Plan should use their insurance. You should take advantage of your preventive care exams and do not postpone medical treatments.  In the current system policyholders know how much their out-of-pocket maximum will be and unforeseen surprises of medical costs are limited due to the standardized and regulated health plans of the Affordable Care Act, aka Obamacare.