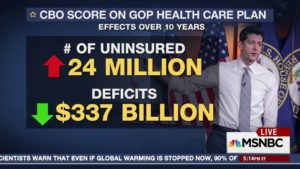 The Congressional Budget Office announced this month their estimate effects on the American health care system and the possible cost for the federal government if the Republican health bill ,”The American Health Care Act” would be implemented.

The only question remains what will happen with so many more uninsured Americans? How do they get their health care taken care off? We learned during the ACA time that preventive care will in the future reduce health care cost. How can we make sure that preventive care will be available to Americans. Running to the Emergency Room, which than all taxpayers have to pay, cannot be the solution.